We didn’t originally plan on riding over Portage Pass to Whittier – why would we? At two miles long, the Portage Pass Trail is shorter than the paddle across Portage Lake to get to it. The original plan was to spend a few hours packrafting to Portage Glacier, but then camping was mentioned. Well, if we’re bringing camping gear, we may as well haul everything, and if we’re hauling everything, we may as well ride to Whittier. Besides, it will make for a great gear – and partnership shake down.

Lisa and I met outside a grocery store in Fernie, British Columbia last year, when I stopped in for a resupply along the Great Divide Mountain Bike Route and she was in town on a mountain bike road trip. As chance meetings sometimes go, within a few hours we were planning a trip together. Over the next few weeks, with a few emails back and forth, we settled on bikepacking, backpacking, and packrafting in Alaska for the following summer.

Lisa’s from British Columbia and has spent most of her life living, working, and playing in the Northern BC Mountains. She’s also full of positive energy and game for just about any outdoor adventure. Some may think its a little crazy to head off into the Alaska wilderness with someone you only met once outside a grocery store, but for us it’s how we travel. Besides, neither of us knew anyone else with a packraft, fatbike, and months of free time.

Portage Pass lies at the end of Portage Valley in the Chugach National Forest, about 40 minutes southeast of Anchorage. Historically, it was used by Alaska Natives, Russian fur traders and early settlers as a route over the mountains to what is now Prince William Sound. In 1943 the Anton Anderson Memorial Tunnel was constructed, so today it’s a moderate hiking trail from Whittier that ends at Portage Lake, directly across from Portage Glacier.

Packrafts, for those who aren’t familiar with them, are inflatable boats that pack to the size of a two person tent and weigh about the same. Lisa used an older style Denali Llama with a Cruiser Spray Deck and I used a newer Yukon Yak with a Whitewater Spray Deck. While these rafts are rated to carry around 400 pounds, you’d be hard pressed to paddle them anywhere with that much weight. Also, the larger the surface area above the water, the more wind resistance you feel. Packrafts are remarkably stable when loaded, provided they are blown up firm and the load is secure. Even a little softness can make handling difficult. With warm air and cold water, placing the raft in the water for a few minutes, then topping up the air (a process called tempering) gives the best results. As for strapping down the load, first- quality straps are a must. Besides the risk of loosing gear, a broken strap can make the load unstable and cause the raft to flip. And a full loaded packraft is almost impossible to right without firm ground to stand on. For bike disassembly, I remove both wheels, the non drive side pedal, and the seatpost. To balance the raft, I put my backpack behind me, strapped to the rear tie-downs, and my bike and bikepacking bags strapped to the front. Steve Doom Fassbinder, who is possibly the father of bikerafting, has a great video showing how this is done. 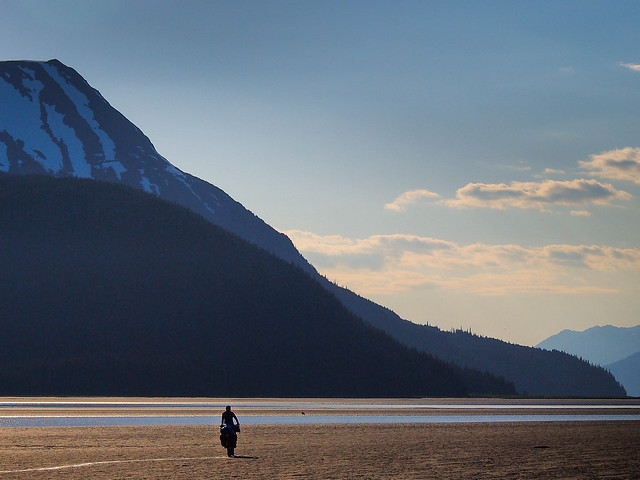 Thanks for visiting and stay tuned; this was just the beginning of our Kenai Peninsula trip, so there’s more to come.