When Lisa and I were planning our Alaska bikepacking trip, we knew beach riding had to be included. That was one of the main reasons we chose fatbikes. Unfortunately, after some research we realized long stretches of easily accessible and rideable coastline are hard to come by, but not on the Kenai Peninsula. Riding the west coast of the Kenai Peninsula isn’t something new; the first trips I read about were Pat’s and Kathy’s Near Hope to Homer trip, which was back in 2005, then Eric’s and Dylan’s 2008 trip.  While chartering a plane was out of our budget and chest deep slogs through marsh and mud didn’t seem like the most fun, the beach riding looked amazing.

The Kenai Peninsula is home to some of the best and most accessible outdoor recreation in Alaska. I first read about the great bikepacking a few years ago, when I saw a write up on the annual Kenai 250 bikepacking race, which links some of the best singletrack on the peninsula into a 260 mile loop. The route includes Resurrection Pass, Russian Lakes Trail, Lost Lake Trail, and Johnson Pass – trails that should not be missed on any Alaska bikepacking trip.

After riding the Resurrection Pass Trail from Hope to Cooper Landing (which I’ll write more about later), biking on the Sterling Highway wasn’t very appealing. Most highways in Alaska have a decent shoulder, but not this one, and there’s more blind turns than straightaways. It was time for some hitchhiking.

Many would think it would be hard for two people with loaded fatbikes to get a ride, but it wasn’t. Pickup trucks are everywhere and with a kind face and a cardboard sign, rides happened pretty quickly. After getting a ride to Soldotna and restocking the gummy worm and peanut butter M&M supply, we rode the North Kenai Road to Nikiski and the start of four days of beach riding.

It’s 106 miles from Nikiski to Homer and while this trip can be done most anytime, June to mid-August is best. Temperatures are warmer, so the cold wind off the Cook Inlet doesn’t feel so frigid, and the days are at their longest. Also, if you want to combine this with other great rides on the Kenai Peninsula, such as Resurrection Pass or Johnson Pass, the higher elevation snow has mostly melted by this time. For navigation, here is the KML track file, which works with Google Earth and Maps.me. But with the exceptions of the Kenai and Kasilof river bypasses, it’s water on the right and bluffs on the left. What is necessary is a watch and tide chart, or at least have a reliable tide app such as Tides Near Me. Most of the route has little danger of being caught by the high tide, but a few short sections, and much of the stretch from Anchor Point to Homer are exceptions. When in doubt, ask a local. Also, the Ninilchik River, Deep Creek, and Anchor River need to be crossed at low tide. Many of the banks in Alaska give tide charts away for free.

There are countless options for rides along the coastline. To add another 20+ miles to the start of this ride, continue further north on North Kenai Road and begin at Captain Cook State Recreation Area. To extend the finish, you can continue past Homer for another 16 miles to Kachemak Selo, then return on the Homer East End Road. There’s also no reason why this trip can’t be ridden from south to north, if that’s your preference.

Most of this route is on firm sand and gravel, and is 99 percent rideable. The one percent of hiking is through a few rock gardens between Anchor Point and Homer. Lisa and I both rode Surly Pugsleys, hers with 4″ tires and mine with a 4.8″ in the front and 4″ in the back. The extra flotation of fat bike tires is nice, but most of the route is firm enough that very low pressures aren’t necessary. While I haven’t tried it, I suspect much of this route can be ridden on 29+ or B+ bikes as well. As with most beach riding, the damp sand closer to the waterline is usually the firmest and fastest. We had packrafts with us, but unless you want to paddle across the Kenai and Kasilof rivers, they aren’t needed. Between the fine sand and salt water, your bike is going to see a little abuse. Repacking your bottom bracket and hubs after this trip is a good idea. If you need any parts or repairs, Cycle Logical in Homer is a full service bike shop that also offers fatbike rentals and guided beach tours. Even if you don’t need anything, it’s worth stopping in; they’re one of the best bike shops in Alaska.

For food and supplies, Soldotna and Kenai are the largest cities on the peninsula and have most everything, except for a bicycle shop. For last minute snacks, there is a Tesoro gas station and store in Nikiski, and that’s the last supply stop heading north. Along the route fresh water and snacks are available in Kenai, Ninilchik, Happy Valley, and Anchor Point, from stores along the Sterling Highway. Once you’re in Homer, skip the Safeway and head to Save U More, it has a better food selection with better prices. That’s where the locals go.

As for camping, there are countless great spots along the way. We did this trip during exceptionally high tides, but still found plenty of camping well above the high water line. Keep in mind the difference between low and high tide can be over 20 feet, so what seems like a great spot in the evening may not be so great in the morning. Also, locals fish according to the tides, not the clock. That quiet, empty fishing shack village may be bustling at 2:00 am. We found this out first hand.

One final note: Midnight beach riding with the warm light of the setting sun shouldn’t be missed. Rather than spend the day in Anchor Point waiting for the evening tide, we hitchhiked to Homer and started riding north around 8:00pm. We arrived back in Anchor Point around 2:00am, with the orange twilight glow illuminating our way. 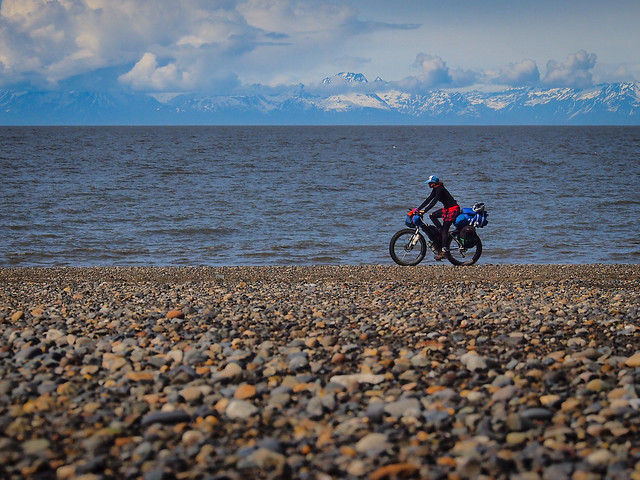 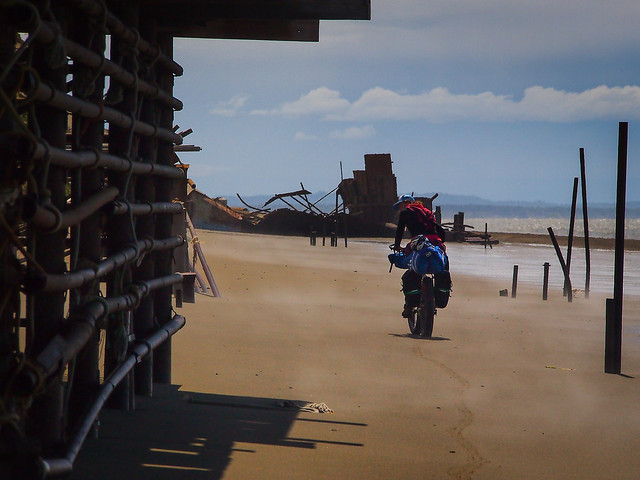 I can definitely say this was one of the most enjoyable rides I’ve ever done. We saw hardly any trash on the beaches and most of the time, hardly any people. The slowly changing scenery and the rhythm of the waves made the trip meditative and relaxing. Also, while the elevation gain along the route is about zero, the wind and sand resistance make up for it and encourage you to take it slow.

Our time on the Kenai Peninsula wasn’t over after this, there were still a few trails we wanted to ride. Thanks for stopping by and stay tuned for more.

14 thoughts on “Beachpacking Nikiski to Homer”