Keeping this blog has proven to be a greater challenge than I anticipated. Between trying to learn Spanish, many hours of pedaling, searching for places to camp, meeting locals, and just trying to relax, my time has been a little thin. I’d like to keep this going if for no other reason than to have a journal that I can reflect back upon and forum to express my thoughts, but only time will tell.

Anyway, since the last post I have finished up my work in Douglas, Arizona and Fronteras, Mexico and have begun my travel south. Right now I am in Creel, Mexico, possibly the most beautiful place in the state of Chihuahua. I started this journey from Sierra Vista Arizona and have traveled some great roads, through some amazing and ……. interesting places to get here.

The route from Sierra Vista, AZ to Douglas, AZ follows a highway for part of the way, until the highway crosses an abandoned railroad bed.

This railroad bed is quite rough and washboarded in sections, but a quiet alternative to the main road. Unfortunately, discarded water bottles, plastic bags and clothes litter the sides of the route and you are rarely out of sight from a border patrol agent or a strategically placed camera.  From Douglas to the border crossing in Antelope Wells, New Mexico is where the fun riding began.

15th Street in Douglas, also called Geronimo Trail Road or the GTR, is a dirt road that follows the border with Mexico

and takes you over the mountains into New Mexico.

With the exception of the occasional rancher in a pickup, the only vehicles or people you will see are border patrol agents, and there are a lot of them, or possibly someone the agents are looking for.

For anyone interested, here are some directions and  information:

and this is reflected in the attitude of the agents, who were some of the friendliest and most helpful I have encountered at any US border crossing. Once crossing into Mexico the road turns to dirt

and follows ranchland fenceline and barren desert to Mexico 2, a narrow paved road that is shared with semi trucks pulling tandem trailers. Not a road to ride while listening to your iPod. Eventually I arrived in Nuevo Casas Grandes, once a dangerous Narco controlled city, but now a thriving center that is undergoing revitalization.

My plan was to loosely follow the route the Dirt Bag Chain Gang took four years ago, but warnings from locals, police and military convinced me otherwise. The violence that plagued Nuavo Casas Grandes in the past didn’t just disappear, it moved to the smaller towns in the mountains and I was told of quite a few horrors that have happened recently. It’s sometimes difficult to differentiate between drama and fact in Mexico, but with so many great routes to travel and the fact that I am traveling solo, I decided to change my plans and stick to the valley.

I spent two days in Nuevo Casas Grandes, most of that time hanging out with Tony, who I met when he passed me heading the opposite way on his motor scooter but turned around and insisted I stay at his place. He is a watchman for a local business, a master of frugal living and quite a good rider.

I checked out the UNESCO recognized Paquime Ruins

and Tony and I rode out to Colonial Juarez, a town settled about 100 years ago by Mormon Missionaries 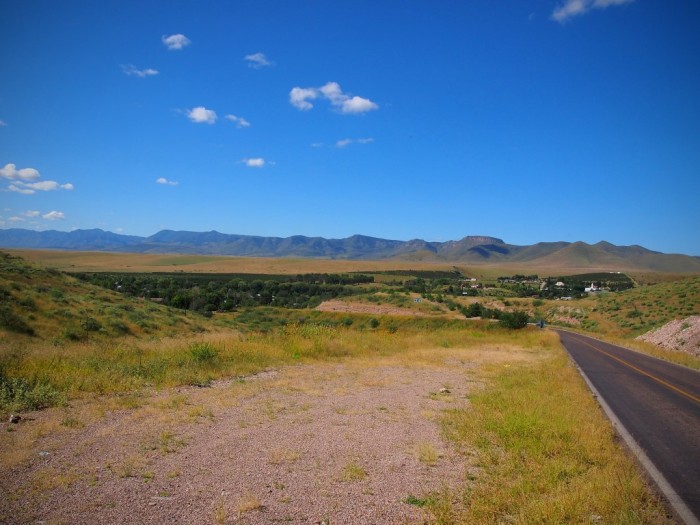 and home to the Juarez Academy, a private top tier Mormon school. 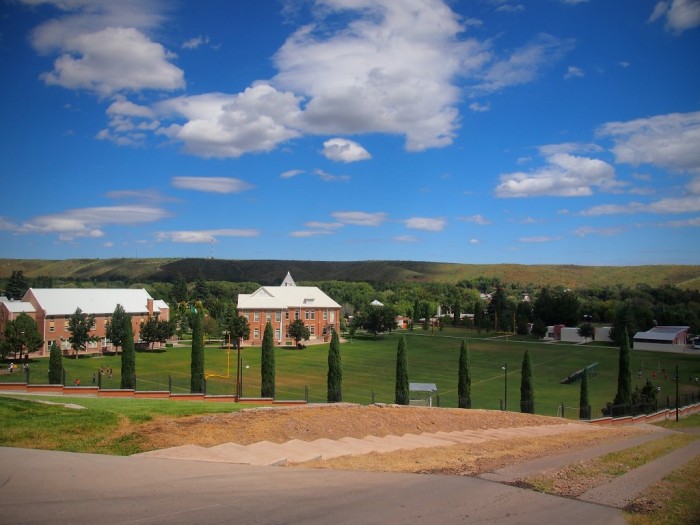 and while I may not share their beliefs, I truly respect many of their core values and their desire to make a positive change in the world. 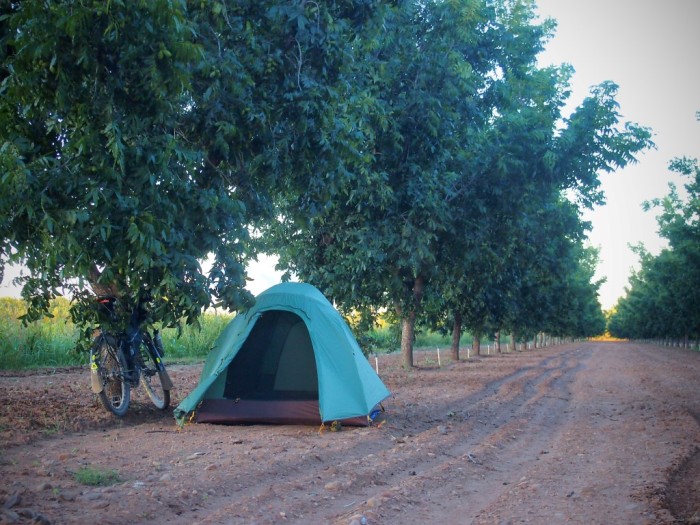 and breakfast in the plaza 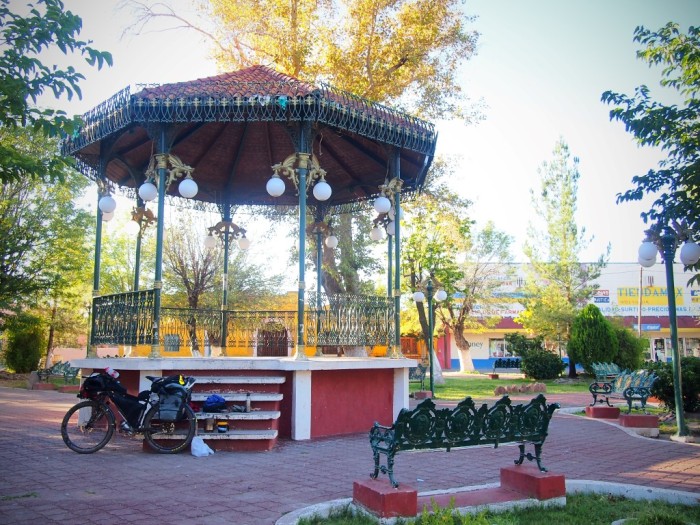 I headed south to Namiquipa on a very low traffic road with a wide shoulder.

I couldn’t figure out why no one recommended this road or the town of Namiquipa, it seemed like a perfect cycling route,

but as I found out it is also one of the fronts in the Naro vs. Police battle. Arriving in Namiquipa around 4:30 on a Saturday I was greeted with cold stares and there was hardly a business open or a person wandering around.

The first police officer I saw greeted me by stepping out of his truck with his folding stock Beretta rifle held close. After answering a few questions and finding the one open tienda to get some food, I headed out of town and found a very hidden camping spot.

I returned to town the next morning (it was the only route through the area) filled up with water and headed south through police and military checkpoints. After two searches of my bags, many interrogating questions (Lo siento Yo no entiendo repeated over seemed to be the best answer, even when I understood the question), a reroute due to a road shown on my map not existing, and a night in an apple orchard I arrived in the city of Alvaro Obregon in time for breakfast.

From Alvaro Obregon I headed south to the city of Cuauhtemoc, then west on Mexico 16, with it’s wide shoulder, to La Junta, a major crossroads town that was also not on my map. Cartography in Mexico leaves a bit to be desired and traffic patterns seem to be dictated more by available space then signals, signs or lines, but traveling some of the major roads is sometimes necessary in order to avoid the current Narco problem areas.

From La Junta a twisty, hilly and very narrow road took me to Creel

where I am currently contemplating my next move. My travel preference has always been to avoid the major cities and stick to the less traveled roads and small towns, but in Mexico many of the cities are currently the safe areas and the rural areas are where the danger is. From Creel I can continue west to the coast, which has problems of its own, continue on an inland route guided by local knowledge and gut instinct, or…….. As a solo traveler I’m weighing these options carefully.