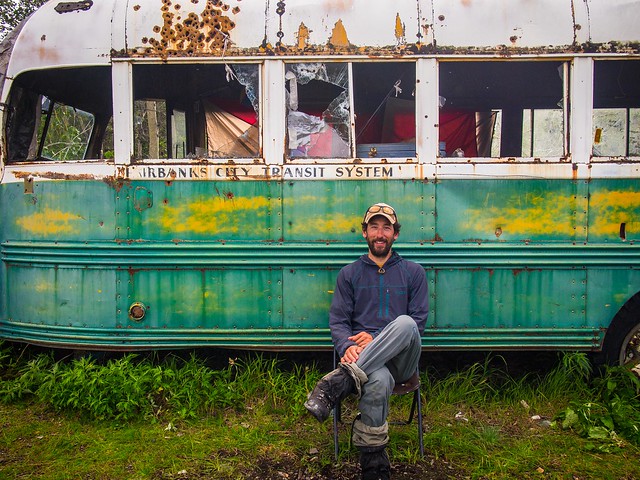 I’m interrupting the posts on the Great Divide Mountain Bike Route to catch up on a few trips from the summer of 2014.

Visiting Bus 142, aka the Chris McCandless bus, aka the bus from Into The Wild had been an almost 20 year dream of mine. There is something about Chris’s story, as told by Jon Krakauer, that lit a spark in me. As evidenced by the amount of people from around the world that make, or at least try to make, the pilgrimage to Bus 142, it lit a spark in many others as well.

Bus 142 is about a 20 mile one way trek into the wilderness from the parking area at the end of the Stampede Road. This trip shouldn’t be taken lightly. We personally saw some interesting characters both heading into, and coming out defeated from the Stampede Trail. Some notable ones are a French kid in canvas sneakers, jeans and an overstuffed backpack with a cotton sleeping bag strapped to the outside. He was soaked to the bone from the Savage River, but wisely decided not to try wading across the Teklanika River. There was also a guy, definitely out of shape and also with an overstuffed backpack, who had a rifle strapped to the outside that he said was for protection. He said he had gotten lost in the maze of beaver dams for about 4 hours and never did find the continuation of the Stampede Trail. He was giving up and heading back.

For someone with outdoor experience, the trip back to Bus 142 isn’t very hard, with the exception of the Teklanika River crossing. For this we brought our Alpacka packrafts and stashed them in the bush after we crossed. The only other people we saw on the far side of the river were a group at the bus that also used a raft to cross. Besides the river crossing, just prepare for wet feet, mud and bugs.

With that, enjoy the photos.