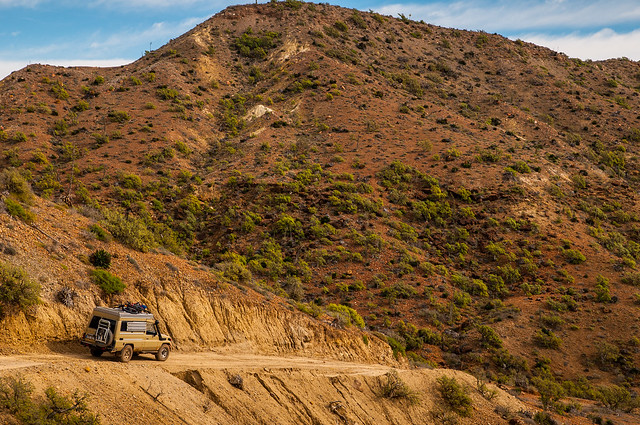 To guide our way through Baja I tried to get the Baja Almanac, but it was sold out everywhere I looked, so we primarily rely on the National Geographic Adventure Travel Maps for Baja North and Baja South. We also use the International Travel Maps Travel Atlas of Mexico and PDF copies of the Mexico SCT maps for Baja. For GPS navigation we use an iPod Touch with an external Dual GPS unit that tethers through Bluetooth and primarily two apps, the paid app Gaia GPS and the free app MAPS.ME. The goal is not to travel every dirt road in Baja, but if there is a way we can link two points without traveling on pavement and the route looks interesting, we go for it. Rather than write about the places we saw, people we met, spots we camped, and the experiences we had traveling around the peninsula, which were all great, I’m choosing to write about the routes we took and to give some post 2014 hurricane route conditions.

As a side note, many off pavement tracks in Baja are pretty remote and water or help can be really hard to come by. These routes are for self-sufficient travelers who can hopefully repair whatever mode of travel they are using, because it may be a long wait for the next person, or a long walk out. Also, some of these routes are rough going, especially after the hurricane this past September and averaging less than 15 km an hour, for the whole day, is not out of the question. For Claudia and I, besides all the spare parts, recovery gear, and almost 200 liters of diesel we haul around in the Land Cruiser, we also carry a few weeks’ worth of food and at least a weeks’ supply of water.

We crossed the border in Tecate and while there are some great routes south along the western side of the Sierra Juarez Mountains we were anxious to get to the warmer and dryer climate of the south, so these will have to wait for our trip back north.

The first major deviation from Mex 1 happened about 50 km south of Rosario de Arriba and took us towards the Pacific coast and the fishing town of Puerto Canoas. 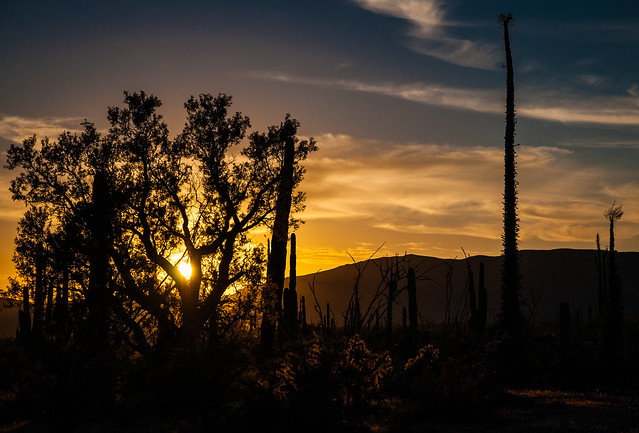 The route continues along the coast, in an area many call the Seven Sisters, and finally rejoins Mex 1 about 15 km north of Villa Jesus Maria. We hadn’t read about this route, but it looked good on the map and seemed like exactly what we were looking for.

The road is in pretty good shape between Mex 1 and the fish camp of San Jose del Faro, then after crossing a swampy section south of the camp it gets a little rougher.

There is excellent camping almost anywhere on this route and even a sandy beach just south of Punta Cono. 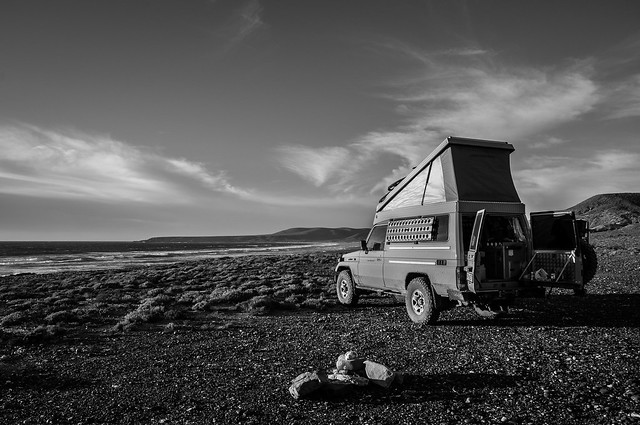 After Punta Cono the track turns into a rough, but maintained dirt road and you may even see a few fisherman or surfers on your way to Santa Rosalita. There’s a paved road back to Mex 1 from Santa Rosalita, but there’s also a rough, but great track that continues along Bahia Santa Rosalita. The camping along here is less inviting then most of the spots to the north, until you arrive at Punta Rosarito, where the camping is great, but it’s also much more crowded with people who came in from the south. From here a sandy, but smooth road takes you back to Mex 1.

While there is much to see and do to the southwest of Guerrero Negro, we decided to leave this for the trip back north, so next stop was San Ignacio. 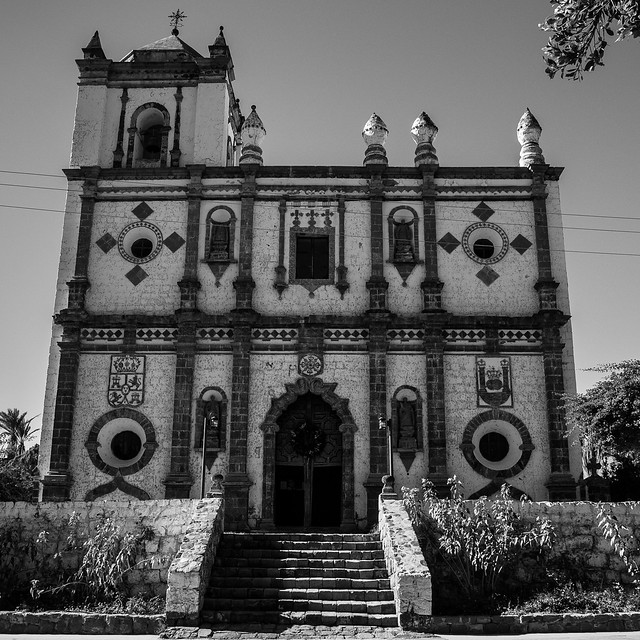 On the map there’s a really inviting route south east of San Ignacio that goes over the mountains from Patrocinio, passes Mision de Guadalupe, and ends in Mulege. After checking out Laguna San Ignacio 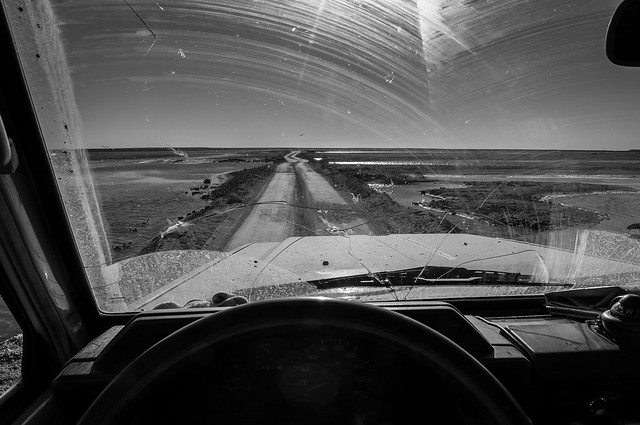 we headed inland on a road that was pretty damaged from the hurricane. In Patrocinio we asked a few locals about the condition of the route over the mountains and were told that it no longer exists. I don’t take defeat easily and I really wanted to continue on and see for myself if the route was passable, but after looking at the distance we still had to go, topo lines on the map that showed some really steep climbing and the damage around me, it didn’t seem worth it to burn all the diesel just to turn around in the end. On our way back out we passed a small house with a person outside and I asked him just to get another opinion; the answer was still the same, no camino.

Back out on the pavement we headed east to Santa Rosalia, then south along the coast to Bahia Concepcion. There are many inviting sand beaches along this route for camping, but Claudia and I instead chose to head a little further south, then east, to Bahia San Nicolas. The camping spots weren’t as nice, but this was made up for by the solitude. On the map there’s a road shown that continues north from San Nicolas along the coast, then turns inland and rejoins with a track that goes along the east side of Bahia Concepcion. There was only one older set of tire tracks on this route and it’s a bit storm damaged and narrow in places, but it only took a couple of hours and is great alternative to taking the same road twice. 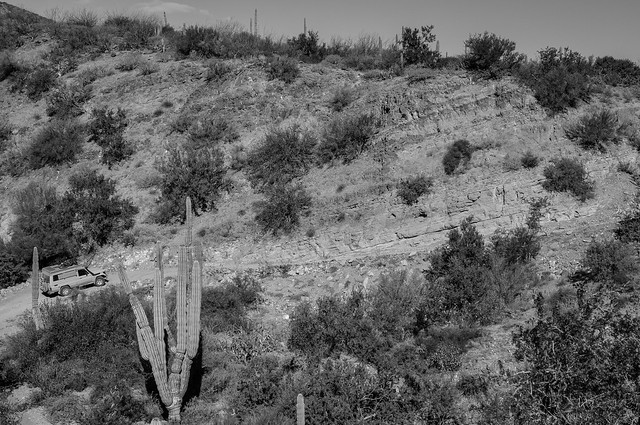 Heading up the east side of Bahia Concepcion the track winds over beaches, around fish camps and through washes with great camping spots along the way. 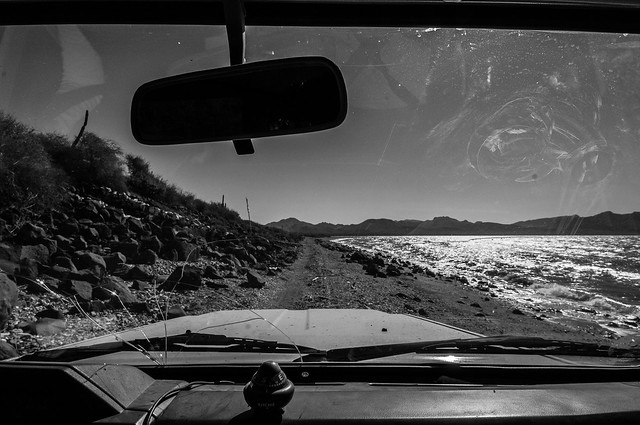 From Bahia Concepcion heading south there aren’t any coastal route alternatives to Mex 1, but there are some great views as the highway winds through the mountains, then back down to the Gulf to the city of Loreto, which seems to be a stopping off point for the Baja backpackers, a resupply point for southern travelers and a second home town for Americans and Canadians. As the highway continues south, a few washes offer access to the Bahia de Loreto before climbing into the mountains and eventually to the sign indicating the left turn to Agua Verde.

The first 17 k or so of the road to Agua Verde was recently paved, but the pavement didn’t hold up so well against the hurricane and lots of damage is evident along the road shoulders. Keep an eye out for rocks scattered in the road, they may have actually been placed there to indicate there is nothing supporting the pavement underneath. Once off the pavement, the road is pretty good all the way down to the Gulf. I’ve seen a few photos of what I thought was Agua Verde, but in fact was the fish camp on the north end of Bahia Agua Verde. 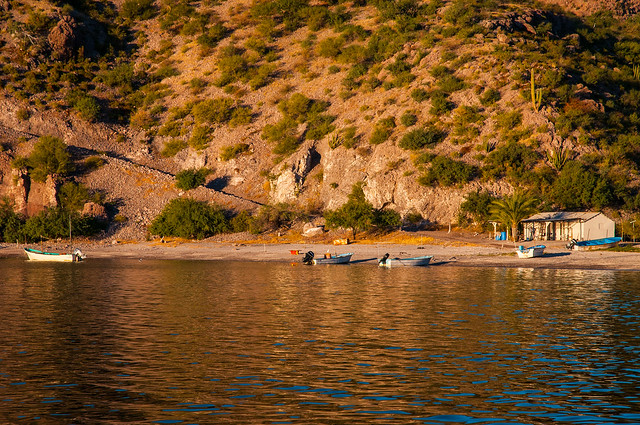 If you have a smaller vehicle, this is a beautiful spot to see. The track is narrow with a steep decent down to the beach, but the reward is calm, warm water perfect for swimming and paddling. The ITMB Mexico atlas and the SCT map for Baja South show a connecting track between the towns of Agua Verde and San Jose and according to the locals we asked, one did exist, but it appears not anymore. There is a wash heading south out of town that I hoped would connect with the route to San Jose, but after some rough driving there was no such luck, so it was back the way we came in and on to Ciudad Constitucion.

East of Ciudad Constitucion is the fishing town of San Evaristo and connecting the two places is, in Claudia’s and my opinions, one of the best routes on the peninsula. There are a few ways to access the route and we chose the track heading east from Villa Morelos that is marked with a sign for Mision San Luis Gonzaga. 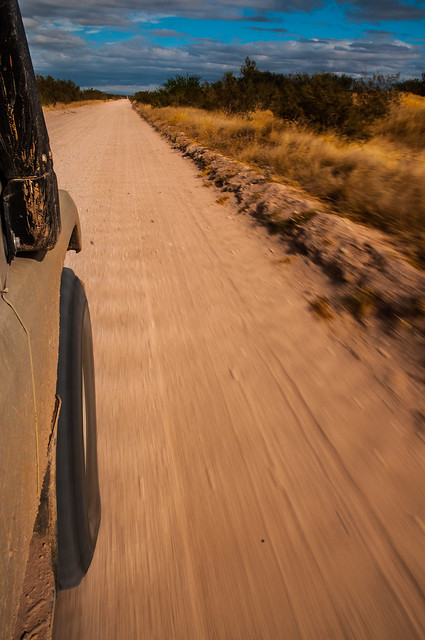 Small towns with friendly locals dot the way to the Gulf

and the road is in pretty good shape up until the town of San Pedro de la Presa. From here the road starts climbing and well, falls apart. Really though, this just makes the route even better. The rough track climbs high up on a canyon rim 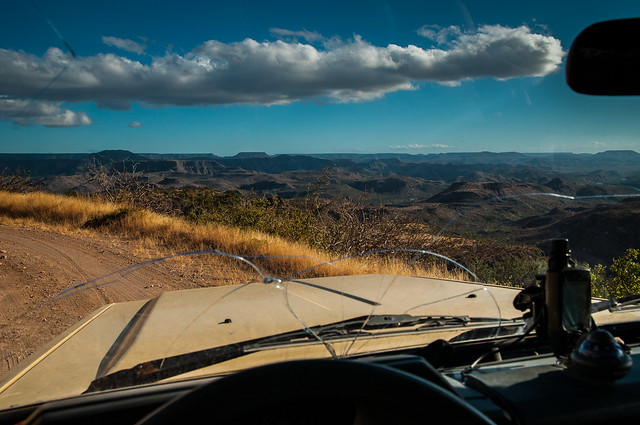 and then descends down in, before climbing and descending some more. Just after La Soledad the road has been re-routed through a small town and taller vehicles will have a hard time getting through this section. The Land Cruiser is about 8.5 feet tall with the bikes on the roof and we were hitting quite a few branches along the way. Also, there is a bridge that has been washed away and the alternative to the already narrow route twists around some boulders that longer vehicles may have trouble clearing. After the detour rejoins the main route,

the climbs and descents get smaller before a final long decent to the junction to San Evaristo. 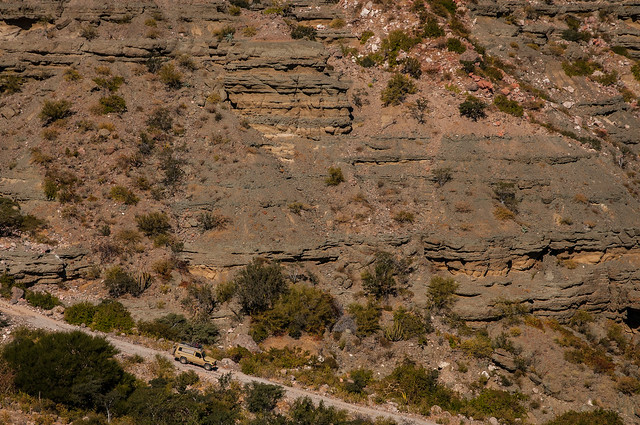 From here the left route heads to San Evaristo and a right heads south along the coast where it finally rejoins Mex 1 just north of La Paz. Along the way quite a few washes and tracks that offer access to beaches and some great camping. 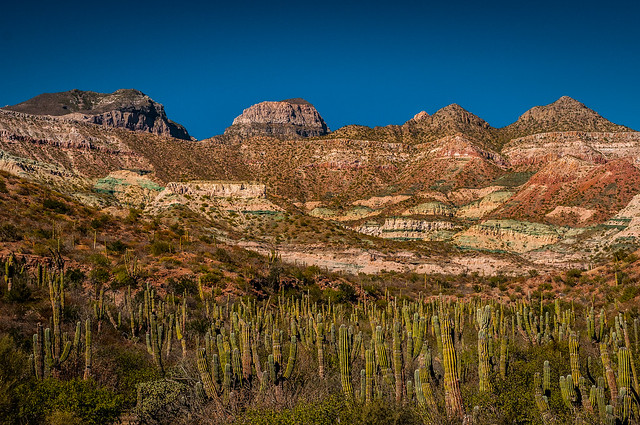 Thanks for reading and stay tuned for Part 2 covering our routes on the southern part of the peninsula.

4 thoughts on “Off The Beaten Track in Baja Part 1”