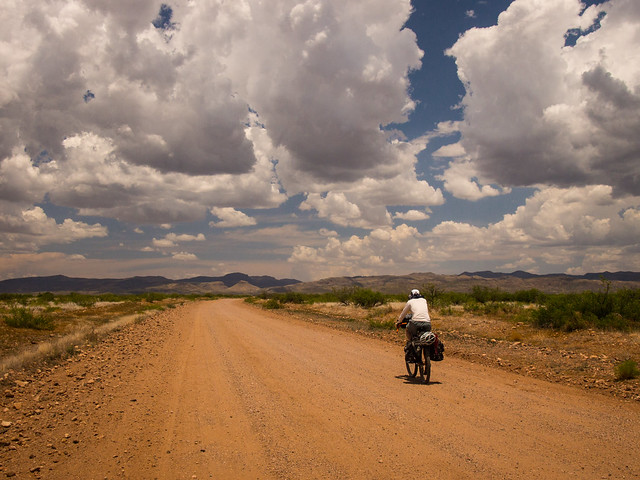 Yes, I know the GDMBR technically doesn’t start in Arizona, but at least in my opinion it should. Logistically Douglas, AZ is much easier to get to than Antelope Wells, NM and while services are limited, it does have a Super Walmart and a pretty good Mexican restaurant. As for getting there, the option I’ve used in the past is to fly into Phoenix on Jet Blue, because they only charge $50 for a bicycle up to 99lbs and take the $40 Transporte Directo shuttle to Douglas. As for a cheap place to stay once you arrive, the Motel 6 in Douglas is clean, not too noisy, and under $40. All this aside, the best part of starting in Douglas is the Geronimo Trail, a mostly dirt road that stretches nearly 80 miles from Douglas Arizona to Animas New Mexico.

Now on to the trip; while riding the Great Divide had been on my list for a long time, the motivation to do it this year came from Jeff. He’s a teacher, so while planning the trip we made an early decision to ride from south to north, which allowed us to start in late June and maximize his summer vacation time. The only downside to this plan was late June in southern Arizona is really hot for a couple of northerners from Vermont. After a canceled flight, some shuttling around (thank you to Jeff’s sister Laura and her husband John) and a packed van ride, we finally arrived in Douglas and the start of the Geronimo Trail.

I rode the Geronimo Trail a couple of years ago, but this time, after riding over the mountains and descending into New Mexico, Jeff and I turned left on Cloverdale Road and headed towards Animas. From Animas, it’s about 30 miles of pavement riding to Hachita and the intersection with the Great Divide Mountain Bike Route.

Alt. C) Optional (but de facto): The 116-mile ‘Chaco Alternate’ is a TD-legal, ACA-official alternate segment between Cuba and Grants, New Mexico. The main route is impassable, potentially dangerous when wet, so riders have the option to follow the Chaco Alternate (paved) route. See ACA Map 5-B for cues.

I’m still processing all the photos from this trip and the rest of my summer journey back to Vermont, so in the interest of time my posts are going to be photo heavy, but light on words. I hope you enjoy.

Thanks for visiting and stay tuned for Part 2 – Colorado